Armyn Naderi has been elected as part of the jury of Bengaluru International Short Film Festival 2022. BISFF is the only OSCAR qualifying short film festival in India. This event has been held since 2010 and this year it will be held in Bengaluru from 4th to 14th August. Armyn Naderi will be part of the jury of the international competition category.

Noghteh Group has been started officially in 2011. Our primary mission is to make movies and launch creative ideas to promote knowledge, culture and anything which makes people’s life better and easier.
Noghteh (نقطه) /nougte/ means point in English, point in French, punkt in German, punt in Dutch and punto in Spanish. For us, Noghteh (point) is everything. We believe that the whole universe starts from a point.
Not only for us but also for almost every field point is a crucial factor: Noghteh (point) in mathematics is the start and end of every line, and in architecture is one of the primary and original sections. In geometry,  point is the basis of geometrical language and shapes like line, triangle, square. In literature, point is the end of each sentences, and it closes the meaning. In visual arts, the effect of everything on page is called point, and point is the smallest unit of each picture.

Behind the scenes: Death of the Author (Feature narrative) Screenplay and directed by Armyn Naderi.

Broken Grail: Khayyam Debates Caligula Private Screening: This even took place on Sep. 30, 2021 in Ferdows Cultural Center. At the start of the event, Armyn Naderi (Director and Writer of the film) gave an opening speech.

Broken Grail: Khayyam Debates Caligula- Behind the Scenes- In this movie, the cast and crew of Broken Grail talks about their experiences in this project.

What is Farsi Textism? What happens to language in online social networks? Is really virtual world harmful for Farsi language? Or on the other hand, is a good and useful platform for Farsi? In this book, the writer tries to investigate Farsi textism in online social networking sites such as Telegram and Instagram. First of all, it studies Farsi developments during history and in the presence of Communication media (from ancient scripts to internet). Then, it describes the characteristics of this new form of Farsi, and in the last step, it tries to describe the reasons of the users who invent this form of language. This book can be interesting for communication specialists, linguists and all the people who are interested in internet in general.

This book has three chapters. In the first chapter, Mohammadarmin Naderi, the writer and director of the documentary, briefly introduces himself and his scientific challenges which he has encountered in doing the research of this documentary. In the second chapter, he wrote an article about the various challenges which a historian documentary maker faces. Naderi tries to present an answer to these questions: What is history and historiography in post modern era, and who is Khayyam?

The last and the most important chapter of the book is the script of the documentary with the same name, which is about Khayyam and his works. During this script, the writer presents some analysis for some of the historical scenes of his work.

This movie surveys the history of world cinema from the invention of camera to digital and 3D cinema.The subjects which have been covered in this movie are as follow:- From the invention of camera to moving images- From the invention of recording camera to silent cinema- From the start of visual effects to aesthetic- Documentary cinema and feature films- The emergence of Impressionism and Surrealism in France, and Expressionism in Germany in silent film- The birth of Hollywood- Different Acting Techniques- Visual Effects from the start to green screen- Soviet Editing Movement and basic editing techniques- The return of sound to picture and end of silent cinema- Hollywood Classic cinema, Modern and Postmodern cinema- Color in Movies

“Iran Cinema in Pursuit of Happiness” is a feature documentary which studies the young heroes of Iranian movies in a 57 period of time. This movie tries to figure that whether Iran’s cinema could make an active hero for its audiences during these 57 years. This film became the best visual research in The Third Annual Cinematic Research Award in Iran.

A Borrowed Life is a short film which has been made in 2022. It has been produced by Somayyeh Chaychi and in Noghteh Group. The writer and director of this musical drama is Armyn Naderi. 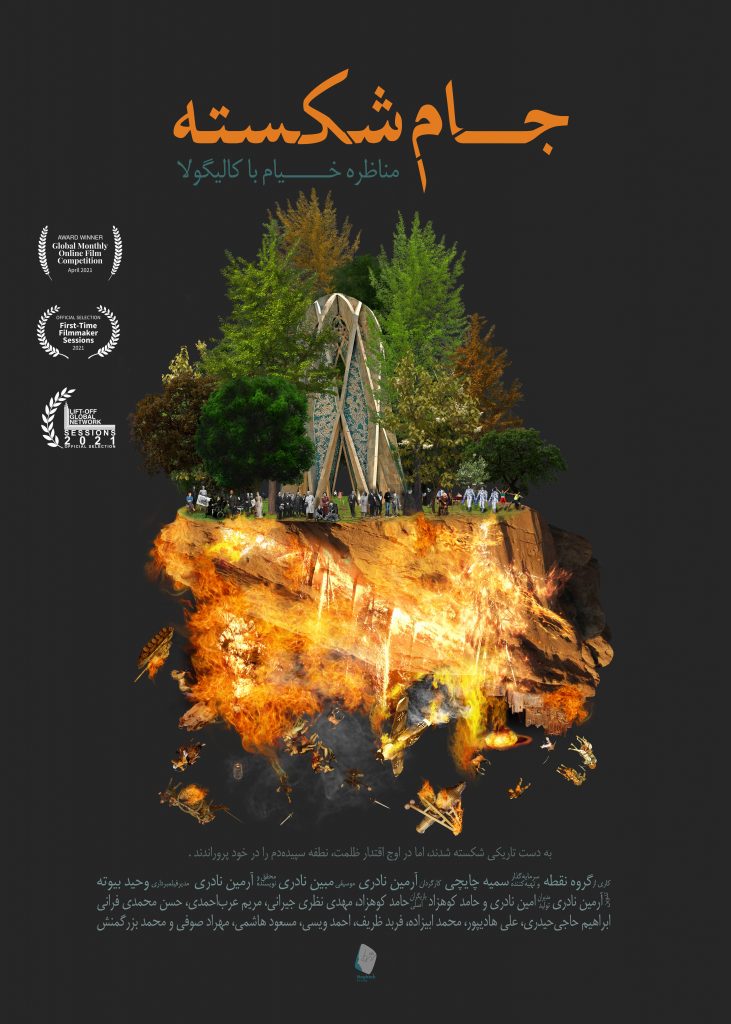 This is the trailer of a long documentary about the life of Umar Khayyam, a philosopher, scientist and scholar. This movie is still under production, and we are searching for potential sponsors as well. At the moment, the production group of this movie are doing the interview parts.

‎‏In February 2017, NoghtehGroup produced a short film with the technique of 360 degree. “Beauty is in the eyes of the beholder” is a movie which puts the audience in the place of the director, and lets them decide from which perpective they want to watch the movie. This movie was shot by Gramin 360, and it was taken in Tehran. This movie becomes a semi-finalist in Los Angeles Cine Fest.